Somali waters support a range of activities including domestic fishing, development projects, foreign fishing, and shipping. Small coastal fishing communities and large urban areas alike depend on coastal resources for food, transportation, goods, and global access. While each activity or resource can be managed independently, a more holistic view of the marine and coastal space illuminates areas where activities overlap, compete, or conflict. As the region’s population grows and the economy develops, activities within each maritime sector will also increase, placing greater strain on resources.

Outlining and understanding these interactions will enable the creation of appropriate management measures that incorporate stakeholder needs, and conserve the coastal space and resources within it for long-term benefit, while avoiding potential conflict. For example, violent clashes occur between foreign and domestic vessels attempting to fish in the same area and for the same species. Shipping could exacerbate these issues if vessel traffic increases and overlaps with fishing grounds to reduce fuel use or transit time, putting shipping vessels in contact with fishers.  Over time, these human activities will further impact the natural environment by removing resources, causing physical damage, or polluting the water. Comprehensive management plans that take into account the need to expand the blue economy while preserving the resources that support it will support progress towards a sustainable future for Somalis. 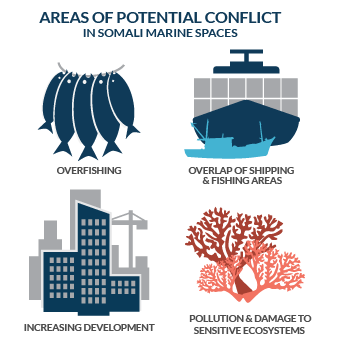 For coastal communities, fishing is crucial to food and economic security, which in turn creates local stability. For Somalis, the exact contribution of fishing to local economies is not currently known, but the sector presents opportunities for growth and expansion, especially through development of the value chain and expanded market access. Long-term benefits from expansion of the fishing sector will involve careful consideration and planning in the context of the other uses of coastal resources and sustainability of the fisheries involved.

Fishing by Somalis is nearly all small-scale and artisanal, conducted in small, open boats with outboard motors. They catch fish and invertebrates close to shore, often in sensitive habitats, using a variety of fishing methods including handlines, pole and line, gillnets, beach seines, and traps. To date, there is little information about the amount of domestic fishing in Somali waters, and this information is needed to assess the current

health of the fishery and its ability to withstand ongoing or increased fishing. Data collection mechanisms are needed to understand which fisheries are most important to supporting Somali livelihoods and how they will be impacted by other uses of the marine space. With this information, fish stock assessments and management plans can be created that ensure sustainability of the resources and enable the fishing sector to provide benefits to Somalis over the long-term.

Fishing by Somalis is nearly all small-scale and artisanal, conducted in small, open boats with outboard motors. They catch fish and invertebrates close to shore, often in sensitive habitats, using a variety of fishing methods including handlines, pole and line, gillnets, beach seines, and traps. To date, there is little information about the amount of domestic fishing in Somali waters, and this information is needed to assess the current health of the fishery and its ability to withstand ongoing or increased fishing. Data collection mechanisms are needed to understand which fisheries are most important to supporting Somali livelihoods and how they will be impacted by other uses of the marine space. With this information, fish stock assessments and management plans can be created that ensure sustainability of the resources and enable the fishing sector to provide benefits to Somalis over the long-term.

Combining sustainably managed fisheries with a robust and efficient value chain could allow Somalis to capitalize on the demand for fish in the region and internationally. Most of the catch by Somali fishers is landed on the beach then processed and sold to domestic markets. Export to international markets is hampered by a lack of infrastructure, including freezers and reliable access to energy; sanitary processing facilities that meet international standards of quality control; freezer trucks, boats, or planes that could transport the processed catch long distances; and trainings for Somalis in each of these skillsets. Improving each of these areas would enable Somalis to expand the market for their fish and receive greater value for the catch.

International development efforts are an important component for stabilizing the country, building the Somali economy, and improving livelihoods. Because domestic fisheries have great potential to improve local food and economic security, international agencies seeking to fund and implement projects often look to the Somali coast for opportunities. Coordination among groups doing related work is key to maximizing impact and efficiency.

This map of recent and ongoing coastal projects has two main objectives. The first objective is to show the geographic concentrations of development efforts in order to promote collaboration among groups working in the same areas and on similar issues. The second objective is to enable groups that are creating new projects to find places and people with the greatest need and not duplicate other groups’ efforts.

The development groups whose work is displayed here include international aid organizations and non-profits. The projects are primarily capacity building and training, but also include awareness campaigns, habitat restoration, research, and policy development. Projects focus on a wide range of activities and often target especially vulnerable populations such as women, youth, and internally displaced persons.

IUU fishing has the potential to exacerbate conflict and deplete Somali resources, but licensed foreign fishing can support long-term economic security by providing income to the country if managed and enforced effectively. At least 13 foreign nations fish in Somali waters. They extract three times more fish from Somali waters than domestic fishers, often competing for the same species and fishing grounds. Besides this direct conflict over resources, IUU fishing by foreign vessels is a major source of resentment for Somali coastal communities. 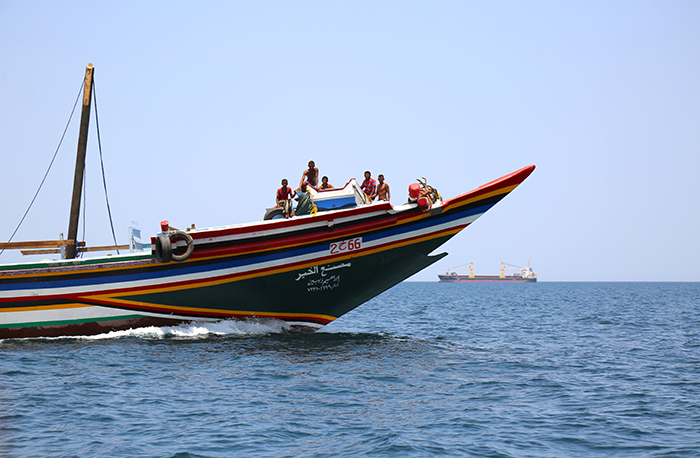 The fishery for highly migratory species in the Indian Ocean is extensive and lucrative. Vessels from countries near and far fish for tuna, billfishes, sharks, and mackerels off the Horn of Africa. The area of most intense fishing varies according to season and type of vessel, but one area of high overall catch in the Western Indian Ocean is off the Somali coast.

Sustainably regulating these fisheries both within and beyond the Somali EEZ is needed for lasting and reliable revenue generation. Because these fishes move across country boundaries, catch of highly migratory fishes in the Indian Ocean is managed by the Indian Ocean Tuna Commission (IOTC), a regional fisheries management organization of which Somalia is a member. It monitors catch and assesses the sustainability of each species by collecting and analyzing data provided voluntarily from fishing countries. Currently, many commercially valuable species are being fished at unsustainable levels. These fish stocks may collapse if regulatory measures are not adhered to by fishers, harming the fishing economy of every country that depends on these fisheries and negating the Somali plan for future fishing revenue.

The presence of foreign bottom trawlers (boats that pull nets across the ocean floor, catching everything in their path) and gillnetters (passive nets that entangle fish) has led to conflict. These vessels are larger and more efficient than local fishers, so they are more quickly fishing down the resources that coastal communities depend on for their livelihoods. Trawling requires relatively shallow water. Off the Somali coast, the only areas shallow enough to be fished by these methods are very close to shore, often bringing trawl vessels into contact with Somali fishers.

Foreign fishing vessels have persisted in Somali waters for decades by exploiting gaps in governance. And there is a need for greater enforcement capacity to be able to apprehend vessels fishing illegally. Even where that capacity is strong, some foreign vessels often use tactics to evade law enforcement. They may change their name, flag, and identification numbers; they may not carry tracking devices and if they do, they may tamper with the broadcast information or turn them off entirely to avoid detection.

The Somali region has long depended on maritime trade as a main driver of its economy. That connection to the rest of the world was cut off during the height of piracy. In recent years though, as piracy has decreased and commerce has expanded, shipping has resurged in the region, especially benefitting the large port cities.

However, this increase in shipping traffic could also cause conflicts. Ships previously avoided transiting close to the Somali coast due to the threat of pirate attacks, but the decline in piracy has allowed ships to come closer to shore to save time and fuel going around the Horn of Africa. This is bringing shipping vessels into areas frequented by foreign and domestic fishers, which could result in accidents or violent clashes, especially when local fishers are mistaken for pirates. Shipping vessels coming close to shore can also threaten the health of the marine ecosystems by causing physical damage or polluting the water. As management plans are created for coastal areas, it will be important to consider discrete, enforceable shipping lanes that allow shipping traffic to flow in areas where they will not compete with fishers or harm natural resources.

All photos courtesy of Jean-Pierre Larroque.

Oceans Beyond Piracy. The State of Maritime Piracy 2015. Denver: One Earth Future, 2016. Available from http://oceansbeyondpiracy.org/sites/default/files/State_of_Maritime_Piracy_2015.pdf