In the small fishing village of Punta Bonita, peoples’ livelihoods are based on collecting piangua, a mollusk that lives under the nutrient-rich intertidal mudflats in coastal mangrove forests. Punta Bonita is tucked away on Colombia’s Pacific coast, and women comprise the majority of piangua fishers. I was lucky enough to meet these resilient fishers. I journeyed two hours from Buenaventura on a small commuter boat to this vibrant fishing village. Outside colorful stilted houses, I spoke with piangua fishers to better understand their livelihoods. Those I spoke with had been harvesting piangua for decades, learning the strenuous practice as children by accompanying and imitating their mothers. While piangua has played a prominent role in their past, the future of this vital resource may be at risk.

Piangua is a critical source of income for the community members. Most villagers rarely consume the piangua they collect. Rather, piangua consumption in Punta Bonita is typically limited to special occasions when it is cooked into stews, ceviche, or rice dishes. 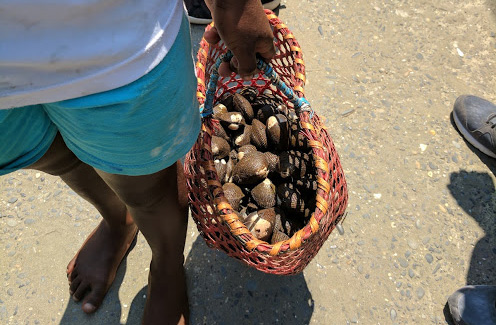 The collectors in Punta Bonita used to sell piangua to domestic markets, but around 20 years ago they began exporting their catch to Ecuador through an intermediary. Ecuador had lost much of its piangua to mangrove deforestation for shrimp farming, pushing traders to Colombia to satisfy Ecuador’s demand.

Unfortunately, Punta Bonita piangua fishers have yet to reap the benefits of this new marketplace. Though increased demand for piangua has the potential to benefit Punta Bonita fishers, their isolation and immobility limits their access to competitive markets, providing them little leverage in negotiations or influence over the price. Those who can afford boats prefer to take their catch to the nearby port of Buenaventura, where they receive higher prices.

Globally, women typically dominate gleaning, the process of hand-collecting mollusks and other sea life exposed at low tide. This type of fishing activity requires relatively few expenses, making it more accessible to women who face difficulties obtaining credit. While this work is foundational to food and economic security for many communities, gleaning is often overlooked as a fishing activity. This omission is ecologically problematic because gleaning is rarely included in data collection, resulting in incomplete catch data and misguided fisheries management.

Women’s labor in the fisheries sector is not only overlooked, but also frequently underpaid. Both the types of activities women engage in and the species they target generally yield lower profits. Gleaning is no exception to this rule. It is often less profitable than traditional finfish fishing. Piangua fishers report making approximately 150,000 Colombian pesos per week from piangua, or around 50 USD. This weekly wage is less than what most reported to spend on feeding their families in a typical week. Many of the women interviewed struggle to satisfy basic needs for themselves and their families, such as access to healthcare and education.

Though piangua currently provide a reliable source of income, there have been signs of recent resource decline which could threaten the livelihoods of the communities that depend on it.

According to everyone I met, piangua are becoming scarcer. One woman who has collected piangua for 35 years recalled that 15 years ago she was able to collect 50 to 60 dozen piangua on any given day. Now, on a good day, she can collect only 15 to 25 dozen, and that number continues to decline. Causes of this decline include competition from outside communities at local collection sites, collection of immature piangua, mangrove deforestation, and climate change. 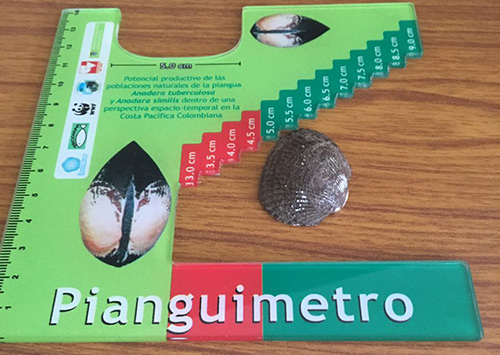 If piangua are collected before they can reproduce, future populations are diminished. There are size guidelines in place to protect piangua’s long-term sustainability, but many fishers break this rule. Some of the village members attribute this to fishers from neighboring towns that are less invested in the long-term sustainability of Punta Bonita’s local fishery. Some also contend that collecting immature piangua is a last resort for those who are struggling and cannot afford to consider the long-term implications for economic stability. Piangua collection may be recourse when other economic opportunities are unavailable. For example, when fish catch is low, fishers may turn to piangua to supplement their income.

Mangrove conservation is central to the sustainability of the piangua fishery. Piangua live among the roots of the mangrove trees that grow in coastal, subtropical environments. Mangroves are being deforested at an alarming rate and are extremely vulnerable to climate change. Organizations like the World Wildlife Fund are combating mangrove deforestation on the Pacific coast of Colombia, near the border with Ecuador, and the mangrove population has benefited from community efforts to replant the trees. In Punta Bonita, advocacy efforts tackled mangrove deforestation, but villagers claim advocacy is not enough. If the region cannot combat mangrove destruction, their piangua stocks may suffer.

As climate change encroaches on coastal communities, pressures on the piangua fishery will only increase. Rising tides and changing water temperatures threaten the fish populations and coastal environments the communities rely on.  This multitude of factors directly impacts piangua, compromising economic stability of coastal communities.

While piangua may not contribute directly to household food security, women’s wages do. Piangua provide women with an independent income source. Studies show that women typically contribute a greater portion of their income directly to feeding their family. It is therefore imperative that women have access to sufficient and consistent incomes, not only for their empowerment, but to provide nourishment and healthy development for future generations.

When I asked what they like best about collecting piangua, almost all the women laughed at me. Collecting piangua is a grueling process accompanied by many dangers, including injuries and snakes. Piangua is their source of livelihood. It is foundational to the economic stability of their community. They do not enjoy collecting piangua; they need it. As one woman states, “Piangua is life. If the piangua die, we die.”