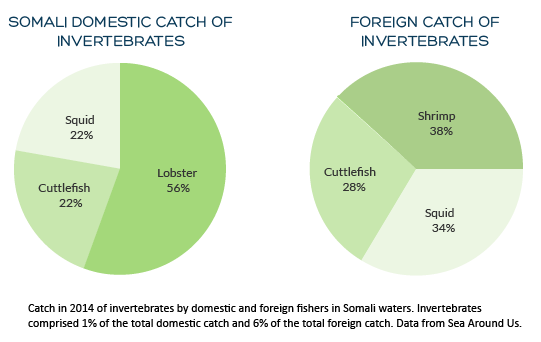 While invertebrates are a small portion of catch in Somali waters, they are economically quite valuable, even in small quantities. Generally defined as animals without backbones, cuttlefishes, squid, shrimp, and lobsters are specifically targeted by foreign and domestic fishers, setting the stage for potential conflict over the resources and access rights to the areas in which they are caught. There is little information available about the populations of these stocks in Somali waters. However, localized and intensive fishing, sometimes with destructive fishing gear, means invertebrate populations in Somali waters could be subject to decline due to overfishing and habitat degradation. Because they live in sensitive habitats, the threats they face increase with disturbance from human activities. Thus, comprehensive management measures are warranted to preserve both the habitats and the stocks of cuttlefishes, squid, shrimp, and lobsters.

Cuttlefishes and squids are cephalopods, a type of mollusk similar to shellfish or snails but that lack an exterior shell. They have eight arms and two long tentacles with suction cups that are used to catch food including fish and crabs. Their soft bodies mean they are also easy prey for sharks and marine mammals. As popular human food items, the foreign fishery for these animals in Somali waters has existed for many decades. Squid and cuttlefishes comprise more than one-third of the catch by bottom trawlers (boats that pull a net across the ocean floor, catching everything in its path) fishing off the coast of northeastern Somalia.

Shrimp are crustaceans related to lobsters and crabs. They are globally ubiquitous and valuable as seafood. They occupy a range of habitats, but in Somali waters they are mostly targeted in nearshore sheltered areas and river mouths. Shrimp are often found near the sea bottom where they hunt for food, making occasional excursions into the water column. Like squid and cuttlefishes, shrimp are caught by fleets of foreign trawlers, mostly in the north off the coast of Somaliland and in the far south near the border with Kenya.

Trawling for invertebrates and fishes in Somali waters by foreign vessels has been the subject of controversy in recent years. This trawling occurs close to shore and overlaps with the fishing grounds of local, small-scale fishers. The legality of these vessels is often questionable because trawling is prohibited by the Somali federal fishing law and there is no centralized licensing system for foreign vessels in Somali waters. Increased governance of the waters and the resources would protect the nearshore fishing grounds and the invertebrates that inhabit it.

Lobsters, large crustaceans like shrimp, live in burrows in the seafloor or crevices in rocks and reefs. They are a delicacy around the world and thus a lucrative export commodity. Contrary to the fisheries for cuttlefish, squid, and shrimp, lobsters are caught in Somali waters mainly by domestic fishers. The primary destination for Somali lobsters is in the Middle East, and this market supports a robust local value chain. Unfortunately, there are reports that lobsters are becoming more difficult to find and, where they exist, their sizes have decreased. These are often indications that the local stock is being fished unsustainably.

Fielding, P.J. and B.Q. Mann. The Somalia Inshore Lobster Resource: A Survey of the Lobster Fishery of the North Eastern Region (Puntland) Between Foar and Eyle During November 1998. IUCN Eastern Africa Programme, 1999. http://epub.sub.uni-hamburg.de/epub/volltexte/2009/1355/pdf/1999_088.pdf.