People watch as confiscated nets are burned on the coast of Lake Victoria as part of the crack-down on illegal fishing by Ugandan and Tanzanian governments.

by Pranietha Mudliar of the University of Denver

In Lake Victoria, the Ugandan government has destroyed thousands of nets and boats to curb illegal fishing. The illegal catch of undersized Nile perch has been blamed for declines in fish stocks. In response, in 2015, Uganda’s President Yoweri Museveni deployed the Ugandan Peoples Defense Force (UPDF) to crack down on illegal fishing. Tanzania followed suit with the police, the coast guard, and fisheries officers through Operation Sangara 2018.

Countries worldwide are grappling with the challenges of curbing illegal fishing. Where other countries have failed, Indonesia is succeeding. Since 2014, Indonesia has confiscated and sunk over 300 foreign fishing vessels, often in dramatic fashion. And the effects look good for the long-term sustainability of Indonesia’s fisheries. But in Lake Victoria, a similar approach to ending illegal fishing could have disastrous consequences for the people who depend on artisanal fisheries for income and food. 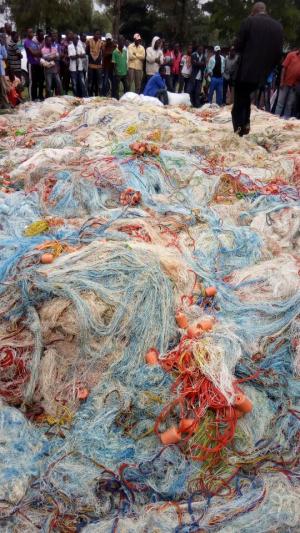 In contrast to Indonesia, fishers on Lake Victoria are not foreigners and they were given no warning of the rapid government response. The suddenness of the action can diminish trust in the government and has implications for the long-term ability of fishing communities to adapt to environmental change.

Over the past four decades, overfishing, species introductions, industrial pollution, eutrophication, and sedimentation have transformed the lake. Recent studies reveal worrying patterns of drought and receding lake levels. These compounding stressors create new types of risk for the three million (and growing) fishers whose livelihoods are impacted.

Proactively enhancing citizens’ capacity to adapt to such environmental changes in a farsighted manner is a critical task for governments. Trust is an important mechanism that affects the confidence with which the public can rely on government assistance in times of crisis. But when government actions are rigidly hierarchical, poorly coordinated, ill-informed, opaque, perceived as illegitimate, or not responsive to citizen concerns, they can reduce trust. Recent government actions in Uganda and Tanzania are doing just that.

In the face of environmental threats, information sharing by the government can promote adaptation in communities, but lack of transparency can have the opposite effect. Lulled into complacency by local politicians who warned fisheries officers not to enforce fishing regulations, the sudden and secretive crack down on illegal fishing caught fishers unprepared. Fishers in Uganda who have had their gear confiscated are now struggling to provide for their families. Such approaches can leave the fishing community feeling betrayed. In my conversations with Uganda and Tanzania’s affected communities, the fishers wondered, is the government planning for us, or someone elsewhere? Why is the government not taking into account the survival of hundreds and thousands of fishers depending on the lake?

The UPDF continues harassing even those fishers who have adopted legal fishing gear.

“The army did not even give us time to make adjustments,” one fisher, frustrated with the army’s tactics, said. “And now [they say], ‘pay a fine for not having a life jacket, pay a fine for not licensing the boat!’ Amidst a crisis, how are we going to pay these fines?”

“No one came back to see how we are faring, what happened to us after the crackdown, and the strain the crackdown put on us,” one fisher said. “Some of us remained in the village, doing nothing, and some went back home to sell their lands. The government keeps saying that they want fewer people on the lake, but is that a solution? Once people on the lake are reduced, where are the rest going to go, what are they going to do? These are people without an education and they have spent nearly all their life on the lake and the government tells them to go! Where? Why cannot the government look at why these people moved from the inland villages to the lake?”

Fishers, desperate to earn a living, adopt even riskier coping measures such as fishing illegally in the night to avoid detection by the army. Such coping strategies are counter-productive to the goal of enhancing stocks of the Nile perch. The governments of Uganda and Tanzania, so far, have not responded to these concerns, but last month the Council of Ministers in the Lake Victoria Fisheries Organization (LVFO) approved $1.8 million to curb illegal fishing.

In the late 1990s, Beach Management Units (BMUs) were created to involve fishers in fisheries management. BMUs have been complacent in illegal fishing, often for reasons beyond their control: insufficient capacity for monitoring and enforcement and systemic corruption within the overall governance system. The UPDF recently replaced the BMUs with Landing Site Management Committees (LSMCs), a proxy management body under their authority. Instead of strengthening the BMUs to enforce regulations, the government justifies dismantling them because, “illegal fishing has gotten so much out of control that we do not have any other option than to wipe the slate clean.” Thus, a critical question is: will the LSMCs, under the army’s leadership, succeed where the BMUs failed?

One fisher described the process of the establishment of the LSMCs: “The BMUs were a community venture. Then the soldiers came. They organized us­­––forced us––mobilized us into attending a meeting. They created a LSMC and appointed leaders by asking us to say, ‘yes or no’ to show support for a candidate. This is how the elections for the LSMC were ‘free and fair’. There is no legal framework to guide the management of the LSMC, so they work under the leadership of the army.”

Disbanding BMUs disenfranchises fishers from decision-making central to their livelihoods and precludes the development of trust in government.

The current state of trust in Lake Victoria is worryingly low and this hinders the emergence of long-term adaptive strategies to counter environmental change. Co-management, through the BMUs, was expected to build trust between fishing communities and distant policymakers. Yet, recent actions have tied the fishing community to the unpredictable actions of the government. Illegal fishing, as well as the top-down, coercive approaches taken to curb it, have the potential to create livelihood crises, exacerbate conditions of distrust, and undermine overall fisheries management in Lake Victoria. Even if the crackdown on illegal fishing is eased, without strong, local-level, participatory institutions for equitable and sustainable fishing, fishers may start fishing illegally again.

Indonesia’s approach to curbing illegal fishing may work against foreign fishing vessels. But when fishing overcapacity is a domestic concern, context-specific measures will have better chances of success. In Lake Victoria, it is of vital importance to develop an institutional and social space that will empower the fishing community to participate with the local and the national governments as equal partners in planning and implementing strategies to reduce illegal fishing, rather than using short-term strategies. Measures to empower communities can go a long way toward developing trust and strengthening long-term adaptation to environmental changes; rather than top-down measures that isolate and disenfranchise the fishing community.

Dr. Pranietha Mudliar is a post-doctoral fellow in Environmental Justice and Sustainability at the University of Denver. Her research experiences are grounded in a global context including regions such as West Virginia, U.S.A., Karnataka and Maharashtra, India, and Lake Victoria, East Africa. She primarily focuses on conditions that lead to trust and cooperation among groups of resource users situated in contexts of poverty, social inequalities, low state-institutional capacities, and uncertainty.

From Suppliers to Scapegoats: Yemeni Fishers In Somali Waters At The Height Of Piracy