A tiny sampling of the hundreds of species of haplochromine cichilds endemic to Lake Victoria. Each species plays a different role in the ecosystem by, for example, eating different foods in different places.

In this multi-part blog series (see here for Part 1, Part 2 and Part 3), our team in the field explores the mounting conflict over fisheries in Lake Victoria, and the critical role of biodiversity and conservation in promoting long-term food and economic security in the region.

By Les Kaufman of Boston University

Boston University – Lake Victoria is a vault of evolutionary knowledge. Studying the Lake Victoria haplochromine fishes – aka fulu, furu, nkeje, or “happies” – is like watching stars being born deep in the time and space of the cosmos. Lake Victoria is a gift, a priceless scroll. We have only to peer into its waters and read what is there.

Our team’s on-going field work on Lake Victoria was designed to look at big fish – Nile perch, tilapia, and the Lake’s biggest catfish, the imposing Bagrus docmac – and little fish alike. Several team members, both on the boats and abroad, are madly (quite literally) obsessed with biodiversity of the lake’s native fishes, most of which are small, only occasionally very colorful, and not commercially valuable. So, what gives?

Though not to Western tastes, haplochromine cichlids are useful to the people who live around the lake. They are the base of a fish soup that is an important home remedy, just as chicken soup is central to my own Jewish culinary culture. They are caught in the same nets as dagaa (the lake’s abundant minnow, Rastrineobola argentea) and used in similar ways: sun-dried and turned into a protein additive for animal feeds.  Economically, their greatest utility is indirect as food for the introduced Nile perch, which appear to grow fastest when foraging on these colorful little fishes.

Before anything can be food, though, it’s fodder for science and this raises familiar questions: how important is it to pay tedious attention to all the little tiny ones? Why must we care about species of no immediate value? Why care about biodiversity?

Haplochromines: a key to evolutionary mysteries

Biodiversity is the variety of life that exists in an ecosystem, measured in different kinds of species, genetic variants, habitats, communities, or relationships.  High biodiversity (lots of species) is a cornerstone of a healthy environment because biodiversity tends to improve ecosystem resiliency. Sadly, we are rapidly losing it all over the world: Lake Victoria has lost somewhere between ⅓ and ½ of its fish species in recent years, and they appear to be extinct. 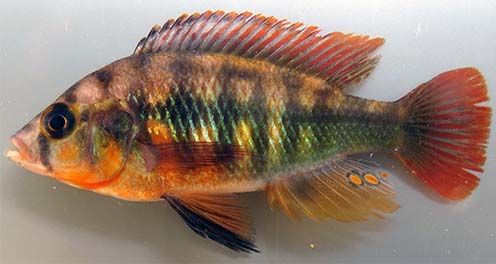 We are fixated on these little fishes – the so-called haplochromine cichlids – because they have evolved rapidly and recently into hundreds of forms unique to the lake. Their diversity is a major contributor to overall diversity in the lake, making haplochromines a bellweather of environmental health. There are other examples of rapid evolution (called adaptive radiations). There are perhaps 600 species of fruit flies on the Big Island of Hawaii, their evolution goosed by lava flows that incessantly redraw the maps of unscorched forest islands, called kipukas.  There are impressive adaptive radiations of frogs, butterflies, insects, antelopes, orchids, cacti…and, of course, Darwin’s famous Galapagos finches.  There are even other haplochromine radiations in lakes Malawi, Tanganyika, and also of other kinds of cichlid fishes in the crater lakes of West Africa and Central America. All play some role – rarely understood – in maintaining the ecological machinery that supports human lives.  In the case of Lake Victoria, this means the food security and other essentials of 30 million human lives.

Most of the time we humans – who have been on the global stage but a relatively short time – have shown up too late to witness the beginning stages of big macroevolutionary events.  It appears that in many (or most) cases, there is an early and mysterious (read: confusing) stage in the creative DNA process when things happen very quickly, in a sort of evolutionary froth, foaming over with novel experimental creatures, like on the Island of Dr. Moreau.  The Lake Victoria haplochromine fishes are still in this formative stage, and we have a unique chance to learn from them before they disappear.

Lake Victoria’s waters, though, are incredibly murky of late, thick as pea soup with phytoplankton. They didn’t used to be. Most of the rivers running into the lake are red with mud. They weren’t always. And it is rather difficult to study a confusing group of fishes that are in the midst, or at least the immediate wake, of a mass extinction.  So, Lake Victoria is a Rosetta Stone of evolutionary creation and destruction: The Great Nyanza is the Lake of Shiva.

The reason Lake Victoria haplochromine populations have suffered is itself an important story that announced itself in the early to mid-1980s, when the lake and its fish community underwent a massive shift. Prior to this shift, 80% of the fish in the lake were haplochromine cichlids. The other 20% consisted mostly of dagaa, catfishes, electric fishes, minnows, tetras, and two native species of tilapias. During the first half of the 1980s, a sudden shift occurred, and 80% of the fish in the lake became Nile perch (an introduced species) plus lesser amounts of introduced tilapias and the native dagaa.  Haplochromine biomass plummeted and a large chunk of the haplochromine species disappeared. That is a big event! However, the surge in Nile perch created a lucrative export market that local people now depend on.

Along with this shift in fishes went a radical change in water quality.  The lake and most of its feeder streams had been quite clear-flowing in the past, but after the shift most of the surface waters of the lake sported a near-permanent algal bloom, while deforestation and erosion had the rivers choked with silt. But what was cause versus effect? Did the change in water quality cause a shift in the fish, or did the change in fish cause a shift in the water? What caused this huge change, a decidedly mixed blessing? We can tell a few stories.

Story number one: it was excess nutrients from land, plus the Nile perch

One idea combines the introduction of the Nile perch with excess nutrients like nitrogen and phosphorus that come from two sources: the atmosphere, due to widespread deforestation and burning in Central Africa, and the watershed, due to runoff of rich volcanic soils into the lake. These added nutrients would normally increase growth of algae, but new growth was likely kept in check by cichlids that prefer to eat algae. When the Nile perch was introduced, this voracious predator wiped out those cichilds, so algae grew, died, and sank to the lake bottom, where bacterial decomposition depleted oxygen in deep waters. Low oxygen levels killed off even more species.

One problem with this story is the curious fact that Nile perch was actually introduced into the lake in the early 1950s but did not rocket in abundance until the mid-1980s. Why the long delay? It is almost as if the perch suddenly rediscovered sex and reproduction after decades of listlessness.

Story number two: it was the wind

As it happens, just before Lake Victoria became oxygen poor in its depths, the prevailing winds that normally mix the lake waters had begun to die, a result of a regional shift in climate dynamics.  The bottom of the lake went anoxic (low oxygen), triggering a massive loss of haplochromines.  Turns out, those fishes were eating more than algae –they also feasted upon the eggs and young of Nile perch, preventing the introduction from really taking hold. As soon as this predation stopped, Nile perch populations exploded, and ever since it has been increasingly difficult for the haplochromines to recover.

The lesson: it was the humans

We still do not know for certain whether either one of these stories explains the sudden shift, and there’s no reason both stories can’t co-exist. Either way, the big shift was probably driven by human activities (introduced fishes, burning of grasslands, poor soil stewardship, and/or climate change), and it could easily have sprung from both local and global human actions. It would seem rather prudent, then, to find more clues as to how we might restore the lake’s ecosystem health, and maintain the biodiversity that remains. This cannot be done without attending closely to the lake’s native fishes.

Similarly, it follows that close attention to biodiversity is important to understanding the possible impacts of a burgeoning cage aquaculture industry on the native fishes and wild capture fisheries of the lake. This is the main question our team is attempting to answer. This set of large-scale, long-term, interlocking questions tie into everything from watershed management, to regional economic development, to fishery sustainability, to climate change.  It is in answering these questions that we have any hope of bringing back a healthy relationship, or coupling, between the lake basin ecosystem and the tens of millions of people who depend upon it. It’s not just about the fish – it’s about the people.

Getting back to the question of who cares about little fishes (other than bigger fishes who eat them), the fact that people do care can be very important in bettering the lives of people in East Africa. The great scientific importance of Lake Victoria’s haplochromines is enhanced by a second reason that some people care: they simply like these fishes. Around the world, tens of millions of people keep tropical fishes in aquaria. For some, the fascination verges on obsession. Among those obsessed, several hundred home aquarists, scattered around the world, live and breathe Lake Victoria cichlids.

These fishes’ endangered status has also attracted the attention of conservationists worldwide. A captive breeding program, led by professional aquarists and recently joined by home aquarists, has maintained several vanished and vanishing haplochromine cichlids for more than a quarter century. Called the Lake Victoria Species Survival Program, it is dedicated to better understanding Lake Victoria fishes and safeguarding the remaining species.  So, all of these tiny, rainbow-colored fishes actually do matter: as a world heritage resource for illuminating evolution, as objects of endearment, as a global conservation priority, as a stethoscope for diagnosing the lake ecosystem, as the base for a favorite soup, and as the choice prey of one of the most economically valuable food fishes in the world: the Nile perch. [For more information on the global importance of freshwater fishes to people, see here.]

Ultimately, conservation is about balancing short term needs with long term goals in the interest of society. But what do you do when people can think only of the short term and their own immediate needs?  This is the base human condition…it is how we are wired.  Advertisers deeply comprehend and exploit this wiring for their own short term and immediate needs. Is it a fool’s errand to hope that this body of self-awareness – called behavioral economics – might also be turned toward securing human needs in the long term, and for everyone equally?  It is this wisdom, vision, restraint, and ultimate reward that biodiversity, for people, is really all about.

Dr. Les Kaufman is a Professor of Biology at the University of Boston and a Faculty Research Fellow at the Frederick S. Pardee Center for the Study of the Longer-Range Future. He is an evolutionary ecologist specializing in the biology and conservation of aquatic ecosystems, and he has spent his career intimately studying systems in Lake Victoria, Belize, New England, and Cambodia (to name just a few).

Shifting Strategies for a Changing World: Six Takeaways from the UN-FAO International Symposium on Fisheries Sustainability