For over 10,000 years, Lake Victoria has provided food and income to all who wanted to fish its waters. But the days of open access are coming to a dramatic close.

Lake Victoria, one of the world’s largest freshwater fisheries, supports the livelihoods of millions of East Africans. One of its greatest virtues has been its open access to all who want to fish in – and eat from – its waters.

But that is changing dramatically. The days of open access are coming to a close. Over the past year, the Ugandan army has intervened in the struggling fishery by burning boats and fishing gear. Up to 40 percent of all boats in Ugandan waters have been destroyed, estimates Dr. Anthony Munyaho, Director of the National Fisheries Resources Research Institute (NaFIRRI). The crackdown escalated in recent weeks with no warning to the fishing communities affected. Reports of brutal beatings – and even killings – are surfacing.

The ongoing military crackdown is an attempt to stop rampant illegal fishing in Lake Victoria. For almost two decades, the valuable Nile perch fishery has faced increasingly high fishing pressure, with fishers often complaining about a lack of fish. While there is debate over whether Nile perch are overfished, everyone agrees illegal fishing is overt and commonplace. Markets around Lake Victoria are full of Nile perch smaller than the legal size limit (50 cm). Indeed, at the recent African Great Lakes Conference, an African fisheries scientist joked that if a gathering of fishers was asked who fished illegally, every hand would go up. Illegal fishing has long been an open secret. 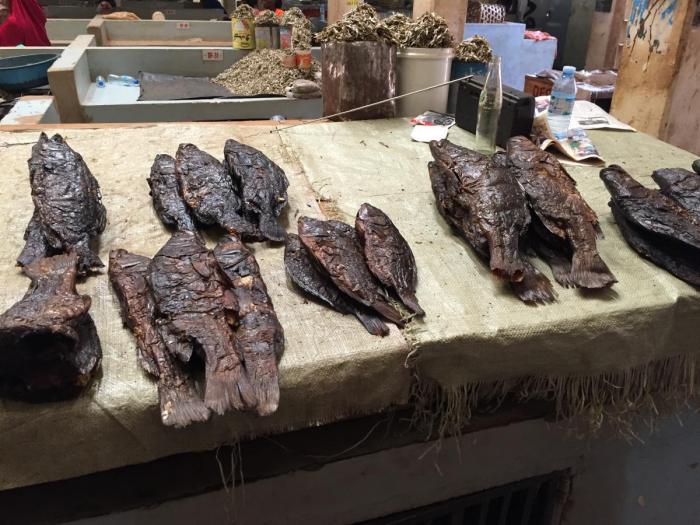 Small Nile perch, not yet of legal length, are commonly found in local fish markets like these dried and smoked fish in Jinja's central market.

Lake Victoria’s fisheries have been touted as a community resource available to all, especially the poor, but there is a downside to open access. The tragedy of the commons, made famous by Garrett Hardin in 1968[i], postulates that common-pool resources, like fisheries, will be overexploited if access is not restricted. But research has shown management interventions[ii], especially those that include community participation, can make open access fisheries more sustainable.

In Lake Victoria, Beach Management Units (BMUs) were established to solve this problem through co-management: a partnership between government, civil society, industry, and fisherfolk to leverage their combined knowledge to promote a sustainable approach to resource use. Since their introduction in 1998, the success of these BMUs has been mixed. While they clearly gave fishers and fishing communities an active voice in the management of the fishery, they have also been accused of corruption and ineptitude. Regardless, BMUs are often held up as the gold standard of community engagement in fisheries management. In Lake Victoria, BMUs and their leaders are tasked with self-enforcing fishery regulations through norm setting, leadership by example, and reporting.

These BMUs have become a lightning rod for complaints about illegal fishing. In response to protests about corrupt BMU leadership, in 2015 President Yoweri Museveni disbanded Uganda’s BMUs and recalled government fisheries officers charged with enforcing regulations. In some landing sites, fishers argued BMU leaders were taking bribes to turn a blind eye to illegal fishing. Ironically, the problem of illegal fishing appeared to increase following the disbandment of BMUs. Without the collective norms set by BMUs, and exacerbated by the absence of trained fisheries enforcement officers, fishers had little incentive to follow the law.

With faith in co-management shattered, Museveni then tasked the Ugandan People’s Defense Force (UPDF), the Ugandan army, with enforcing fisheries laws. Throughout 2017, the UPDF imposed fees on fishers found breaking the law and confiscated and destroyed fishing gear. These actions have occurred in the absence of independent monitoring in fishing communities. Livelihoods will undoubtedly suffer as fishers lose their means of making a living. Anecdotal reports suggest people are already moving out of landing sites, and back to urban areas where alternative forms of employment exist, although scarcely.

Despite the harsh and sudden nature of the crackdown, it has not been universally criticized. In fact, many stakeholders – including fishers themselves – are strong supporters of Museveni’s orders. Scientists at NaFIRRI describe the action as “starting clean” – removing the illegal fishers and reducing overcapacity of fishing boats. They believe the fishers that remain can continue harvesting the resource at a more sustainable level.

There are early signs these efforts may be working. Last August, the UPDF burned up to 80 percent of the fishing boats in Lake Nabugabo, a small satellite lake of Lake Victoria. Dr. Lauren Chapman, a professor at McGill University who has studied Ugandan fisheries for over twenty-five years, says the military crackdown has rapidly increased the size and quantity of Nile perch caught in Lake Nabugabo. A similar story is emerging from the shores of Lake Victoria. This effect could be from higher recruitment of Nile perch, or from less competition between fishers on the water. Finally, I spoke to a fisher in the community of Buluba who strongly supported the UPDF’s methods. He argued that burning illegal boats and gear will ultimately improve fishing in his village.

But for all the optimism, the military-led crackdown may have implications that will only become clear over time. Dr. Pranietha Mudliar of the University of Denver is concerned the about-face of the government – first disbanding BMUs and then cracking down on fishers themselves – could destroy trust in institutions in the long run. Fishers who are currently allowed to fish may be the victims of future crackdowns. Moreover, there is a somewhat arbitrary nature in the targets of gear and boat burning. The sudden nature of the action undermined any adaptive measures that fishers could have used to maintain resilience in the face of lost employment. Finally, women may suffer uniquely because the supplies of small (that is, illegal) Nile perch, which they smoke and sell, will be reduced.

What’s happening in Uganda is also playing out in Tanzania, but through a special unit of personnel experienced in fisheries and environmental issues. This unit is now enforcing regulations long in place – only certain boats and gear can be used – that have never been enforced systematically. Kenya has not yet taken such steps, but they plan to begin soon. The Lake Victoria Fisheries Organization, in cooperation with national agencies, will begin an intensive new licensing and registration campaign for fishing boats next month. Thereafter, managers expect to freeze new entrants to the fishery and limit the total allowable catch. The days of open access in Lake Victoria will soon be over.

Illegal fishing is a widespread problem around the world in both marine and freshwater systems. Studies suggest the practice costs the global economy billions of dollars each year and is a leading cause of overfishing. Few countries would go to the lengths that President Museveni has to stop illegal fishing by their own citizens. For example, Indonesia’s approach has been to blow-up vessels caught fishing illegally – as long as they are foreign vessels. There are signs that the crackdown may soon ease up. What will be the medium and long-term impact on employment and livelihoods? Will this enforcement be sufficient to protect wild stocks of fish in the lake? Ultimately, fisheries management must take into account the impacts on people’s livelihoods for it to be successful. Otherwise, new versions of illegal fishing will simply emerge.