Global environmental change – including anthropogenic climate change, natural climate events like the El Niño Southern Oscillation, and desertification – will be felt most acutely in communities that face challenges to resilience in multiple ways and at multiple scales. This is especially true for fragile and post-conflict countries that rely on agriculture and natural resources, like fisheries, for sustainable economic development.

Take Somalia. The on-going drought in the greater Horn of Africa has affected more than 20 million people. Approximately 6.2 million Somalis – nearly half the population – are experiencing or at risk of famine. 338,000 children under five years of age are acutely malnourished. And over 1 million people have fled their homes in rural villages in search of food and water.

The causes of this drought are complex and difficult to disentangle: the global effects of El Niño and La Niña, the region’s persistent aridity, and changes in the Indian Ocean combine to create drought conditions that researchers work hard to understand and predict. Between 2014 and 2016, a strong El Niño event contributed to the hottest years on record, with global impacts. El Niño and La Niña events are changes in winds across the tropical Pacific Ocean that cause changes in ocean temperature (warmer during El Niño, colder during La Niña) and rainfall across the globe. In Somali waters, El Niño-La Niña events can be strengthened or lessened depending on the temperature patterns present in the Indian Ocean, known as the Indian Ocean Dipole. El Niño and La Niña activity is predicted to increase under anthropogenic climate change.

During the 2016 El Niño, higher than average rainfall in winter and spring caused massive flooding in parts of Somalia, ruining crop harvests and forcing people to relocate and abandon their livelihoods. The La Niña that followed in late 2016 may have caused or worsened drought conditions. Thus, the initial disruption to agriculture and community integrity from El Niño was exacerbated by the effects of drought from La Niña. These complex – and unpredictable – interactions underscore the importance of building community resilience to withstand consequences of global environmental change. 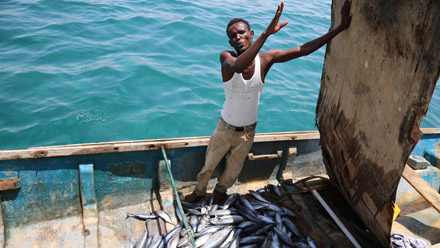 Somalia lays half a world away from the tropical Pacific Ocean, but El Niño-driven changes in the Pacific affect marine fisheries in Somali waters. The east coast of Somalia is the fifth most important upwelling system (see description below) in the world and supports highly productive fishing grounds. Fisheries are a new but growing part of the domestic marketplace: seafood is not a traditional staple of the Somali diet except in a handful of fishing villages. But investment in the Somali fishing sector is growing, and marine fisheries contribute nearly $135 million to the economy each year. For fisheries to remain a reliable source of domestic food and income, the sector must develop in ways that account for global environmental change.

The impacts of El Niño on fisheries include:

In Somalia, the confluence of El Niño-La Niña events and long-term climate change can magnify national security issues. The Federal Government of Somalia is young and the existence of autonomous regions challenges its capacity to deliver famine interventions. Rebel groups, such as Al-Shabaab, can take advantage of these gaps in capacity, further limiting the government’s role. Community resilience can be improved through centralized government-based interventions aimed at sustainably developing the fishing sector including:

Importantly, while fisheries can improve food security and both fisheries and drought are affected by climate, fisheries development must not trade-off with or replace drought relief. Droughts and famines require different responses since they are short, immediate events. Investing in fisheries is not an answer to famine and drought-related food insecurity, and fisheries management requires long-term strategies for sustainable use. Fisheries sector development can, however, provide the kind of community resilience that improves responses to drought in the long term. Ultimately, nations should pursue pathways to greater community resilience that will enable long-term survival beyond short-term shocks like droughts.