Fish is an important food for over 400 million Africans, contributing essential proteins, minerals and micronutrients to their diets. Yet this essential food security resource is threatened by overfishing due to the lack of strong policies and regulations.

Managing fisheries and preventing overfishing has proven difficult when there is open access to water resources, which inherently promotes competition and, in many cases, leads to a tragedy of the commons situation.

Such is the current situation in fisheries on Akagera River.

The Akagera River zigzags across the border between Rwanda and Tanzania. The Rwandan sections of the river reside within Akagera National Park (ANP) and are managed by park officials, while the Tanzanian sections are managed unofficially by Tanzanian fishers called Abanyambo. Despite sharing the river, the two countries do not coordinate management goals or policies for the river’s resources, resulting in conflicts between the Rwandan park officials and Tanzanian fishers. 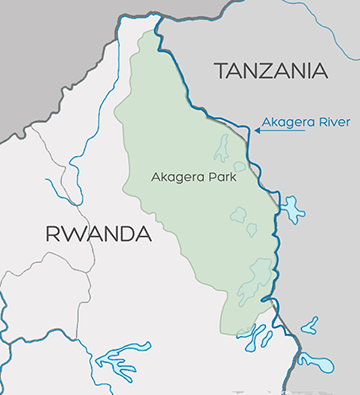 This conflict has historical roots. In 1894, German colonialist Gustav Adolf von Götzen crossed the northward-flowing Akagera River to enter Rwanda, beginning the Rwandan colonial era. This area is the home to the Abanyambo, Tanzanian fishers who live in temporary fishing camps on the swamps; their traditional livelihoods depended on the resources of the river as a source of food and income long before von Götzen divided Tanzania from Rwanda. But since that division, these fishers have been legally limited to fishing in the Tanzanian portions of the river. And due to open-access waters and unmarked boundaries, Abanyambo can find themselves on the Rwandan side where they may knowingly or unknowingly engage in illegal fishing.

In response, the ANP employs a group of marine rangers who patrol the lakes and rivers to stop illegal fishing and protect other wildlife. These efforts enforce the park’s conservation management goals, but often result in conflict. During patrols, rangers chase fishers and sometimes confiscate their boats and nets. While these steps halted instances of illegal fishing, they are far from resolving the conflicts that affect the sustainable management of the river.

There is one option that still needs to be explored: trans-boundary collaboration with constructive policy dialogues between Rwanda and Tanzania, which could prove to be the solution to both ongoing illegal fishing and conflict in the area. 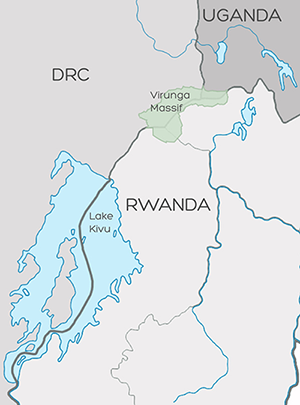 Fisheries conflicts are often transboundary issues. A 2014 article highlighted the conflicts between Rwandan and Congolese fishermen on Lake Kivu.  It showed that distrust and fading collaboration between groups, especially between fishers, caused loss of fishing gear and even human lives, becoming a constant source of conflict on Lake Kivu. Transboundary collaboration is emphasized as the best way to solve those conflicts and bring back peace in the area.

Management of wildlife in the Virunga massif provides another good example of successful transboundary collaboration. The Virunga massif spans an area of 450 km2 and borders eastern Democratic Republic of Congo, northwestern Rwanda, and southwestern Uganda. It is home to many different wildlife species, among them, the famous endangered mountain gorillas. This region is marked by poverty, civil war, and conflicts around natural resources. Tourism of mountain gorillas and other wildlife has been a major contributor to the economy of the countries in the Virunga region. As civil conflicts and insecurity increased in this area, the number of mountain gorillas decreased and hurt the region’s tourism and economy.

In 1991, the three countries got together to find a solution. They established the Greater Virunga Transboundary Collaboration (GVTC), a strong mechanism for strategic and transboundary collaboration which brought together all stakeholders. This helped establish ways to equally share the revenues from mountain gorilla tourism, to protect all wildlife, and to support the local communities that live around the parks. Despite many other conflicts that still exist in this area, the GVTC successfully improved wildlife management in the Virunga massif. This collaboration enabled the protection of mountain gorillas and implemented health monitoring procedures that led to a significant increase in their population in less than ten years.

Conflict can lead to violence, but avoiding conflict is also problematic because unresolved problems may reignite, often with renewed vigor. Akagera National Park reduced illegal fishing and poaching through improved law enforcement. However, fisheries conflict with Abanyambo are far from solved.

There are three main lessons from GVTC that can be applied to securing fisheries in Akagera:

First transboundary collaboration between Rwanda and Tanzania could be achieved by a better joint management of the resource and operations, all in accordance with the laws of both countries. Second, efforts that ensure both Rwandan and Tanzanian fishers profit from the fishery could help solve the problem. For example, from a conversation with fishers, there is already an existing but unofficial business collaboration between Abanyambo and Rwandan fishers whereby Tanzanians sell fish caught on their side to the fishing cooperative in Rwanda where fishes are currently overexploited. Finally, fishing communities around the park must be consulted and their needs taken into account. Akagera National Park has been collaborating with communities to solve human-wildlife conflicts around the park, so this existing collaboration would help in reducing illegal fishing and conflicts. Supporting community-fisheries can increase food and nutrition security, which is a serious problem for the communities around the park.

Effective collaboration among stakeholders can reduce conflicts and lead to sustainable fisheries management. In order for that to happen though, all stakeholders need to learn to speak each other’s languages, identify common ground in the fight against fisheries conflicts, and commit to working in concert toward mutually beneficial outcomes. 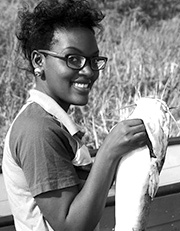 Enathe is Secure Fisheries’ first summer intern. She is pursuing her MS in Environmental Studies at Antioch University New England, with a concentration in conservation biology. Enathe has a range of experience working on fisheries and wildlife management in Eastern Africa. She was a research assistant on a fisheries project entitled “Investigation into the ecology and the feasibility of a controlled fishery in Akagera National Park, Rwanda.” Enathe also worked with multiple research projects on primate conservation and management. Additionally, Enathe was a delegate to the Global Youth Biodiversity Network at the UN Conference of Convention on Biodiversity in 2014.