In this multi-part blog series (see here for Parts 2, 3, and 4), our team in the field explores the mounting conflict over fisheries in Lake Victoria, and the critical role of biodiversity and conservation in promoting long-term food and economic security in the region.

Jinja, Uganda - Lake Victoria illustrates one of the quintessential dilemmas of today’s world: how much short-term gain can humans continue to eek out of a system that is being driven to a potential breaking point? Despite pollution from agriculture and mining and sewage, altered water flows from dam building, invasive fishes and plants, and the pressure of millions of people living on its shores, Lake Victoria continues to produce nearly 1 million tons of fish each year that contribute hundreds of millions of dollars to the economies of Uganda, Tanzania, and Kenya. Nile perch is an important export commodity, while Nile tilapia and dagaa are important sources of local food security.  And then there are the cichlids: small, colorful fish found in hobbyist aquariums around the world, that are incredibly important to the health of Lake Victoria, and whose evolutionary history is as marvelous as Darwin’s finches. But fish catch has stagnated while the human population, and hence the number of people fishing and eating fish around the lake, continues to increase rapidly.

I am leading a four-year, multi-million dollar project* focused on one question: could aquaculture (also known as fish farming) be a boon or bane to the people and wild fishes of Lake Victoria? The practice of cage aquaculture, banned (for now) in Tanzanian waters but growing rapidly in Uganda and Kenya, might provide food and income security for small-scale fish farmers and reduce the widening gap between demand and supply of fish from the lake. But cage aquaculture can be disruptive if done incorrectly, causing the wild fish populations and those who depend on them to suffer. 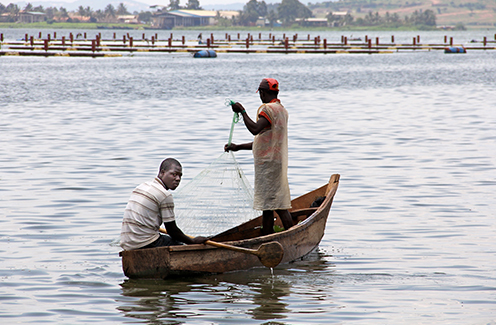 Cage aquaculture may soon occupy some of the best wild fishing grounds. Photo by Sarah Glaser.

Today I’m here at the National Fisheries Resources Research Institute (NaFIRRI) working with several dozen scientists from Uganda, the Kenya Marine and Fisheries Research Institute (KMFRI), and the Tanzania Fisheries Research Institute (TAFIRI) to execute a lake-wide study of the fish and habitats that may be impacted by cages. The growth of cage aquaculture may be fraught with conflict over space, over water, over fish, over conservation priorities, and over markets. Our study aims to minimize these conflicts by pre-emptively identifying the places where conflict is most likely to occur. The same areas in which cage aquaculture will thrive are likely to be the areas where negative impacts on ecosystem health and biodiversity will be most keenly felt. 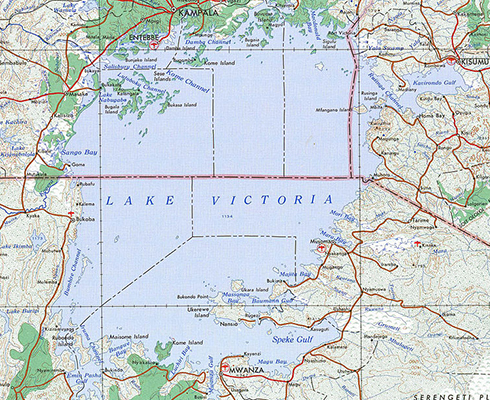 We have a long way to go until we can draw a map of Lake Victoria that shows where these conflict hotspots might be, where cage aquaculture will thrive, and where we should avoid putting cages in favor of protecting habitat that is critical for wild fish populations. Our approach is multifaceted. First, we need to map the wild fish populations. For that, we are combining several scientific surveys (acoustic, gillnet, and trawl) that target different habitats and fishes. We are relying on decades of accumulated knowledge to help us visually identify fishes, and on advanced genetic and isotopic techniques to identify rare, native species and pinpoint their place in the food web.

Second, we need to understand how the human communities will react. Will cage aquaculture be a new opportunity for women entrepreneurs? Will farmed tilapia outcompete wild tilapia in restaurants, or affect the prices in the market? For that, Karin Wedig at the University of Denver has conducted extensive interviews with over one thousand stakeholders around the lake.

Third, we need to identify the places in the lake that have conditions that will best support cage aquaculture: proper depth, water flow, access, and temperature. For that, Stu Hamilton at Salisbury University is building a massive (and novel) GIS database to identify where these necessary conditions overlap.

Finally, we are putting all this information into a decision making tool called MIMES. Created by Roel Boumans, and with significant input from Les Kaufman at the University of Boston, MIMES will let us pull the virtual strings in Lake Victoria and ask questions like: what happens to the Nile perch if we build too many cages? How might the market for tilapia change? What will happen to the dagaa populations if they are harvested to make fish food? The MIMES model will help us predict some of the short and long term impacts of cage aquaculture on the ecology and economy of Lake Victoria.

But what about those cichlids? The ecological diversity, beauty, and evolutionary significance of these fishes have attracted some of the world’s most acclaimed scientists to the shores of Africa’s Great Lakes. More than 500 species are known from Lake Victoria, all of them endemic (native and unique) to the lake region. After major environmental changes (especially eutrophication, the overgrowth of algae) and a population boom of the voracious Nile perch, hundreds of these species disappeared during the mid- to late-1900s. The fate of these iconic fishes was in doubt. But in recent years, we’ve realized that species near rocky shores and clear water have escaped extinction while there has been a resurgence of some species in the open and deep waters of the lake. A number of forces are credited: the biological resilience of cichlids, rapid evolution after species hybridization, and a decline in Nile perch abundance. Nevertheless, about 200 species are believed to be extinct.

Cichlids are very common in the same nearshore habitats that would host cage aquaculture. What kind of threat do cages pose? And what ripple effects might occur throughout the lake? We know biodiversity – the number of different species living in the same place – is critical for healthy ecosystems. An ecosystem with high biodiversity is more likely to bounce back from major disturbances, resist disease and invasive predators, and function in a way that maximizes human health. In scientific slang, we call this “providing ecosystem services.” And in Lake Victoria, cichlids are the key to biodiversity and food web integrity.

So back to the present moment: in a few days, three teams of scientists will embark from the shores of Tanzania, Kenya, and Uganda to start identifying where cage aquaculture could have good and bad impacts on the wild fishes of the lake. In Tanzania, Mary Kishe and Hillary Mrosso lead the TAFIRI team, and Michael O’Neill of the New England Aquarium joins them. In Kenya, Chrisphine Nyamweya leads the KMFRI team and Paige Roberts of the Secure Fisheries Program at One Earth Future joins them. In Uganda, Winnie Nkalubo leads the NaFIRRI team, and I count myself lucky to join them. Back home, Les Kaufman stays up all night waiting for us to upload photos of fish for identification, entertains us with stories from the bush, and never stops cheering for the cichlids. And from the University of Bern and Eawag in Switzerland, Ole Seehausen is guiding us on cichlid sampling and identification while eagerly waiting for a shipment of fish fins that will provide the DNA material for – dare we tempt fate – the discovery of new species, the re-discovery of some species assumed to be extinct, and a better understanding of lake-wide species diversity. Check back on this series for posts from the rest of the team. 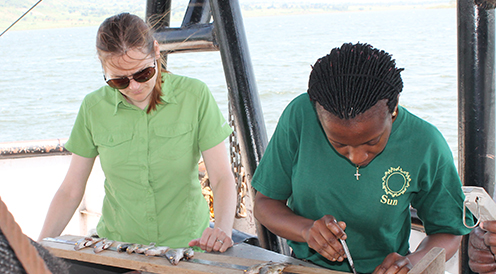 Rigorous scientific information is undeniably key to the conservation of critical habitats and the fish populations they support. But a strong governance framework for regulations on cage aquaculture is, of course, the ultimate way to prevent and reduce conflict between wild and farmed fish. The Lake Victoria Fisheries Organization (LVFO), which coordinates the work of NaFIRRI, TAFIRI, and KMFRI, is the regional leader of Lake Victoria governance. The LVFO is working on new guidelines for sustainable cage aquaculture: where to place (and where to avoid placing) cages, the optimal water depth for good circulation, the types of feed that create the least amount of water pollution. But it will be up to the governments of the individual countries to enforce and communicate these policies in clear and straightforward ways, and to earn the support of the fishing communities to see successful implementation.

Stay tuned for our next installment from Kenya!

* This project is funded by the Dynamics of Coupled Natural and Human Systems program of the National Science Foundation.